Meeting of the Patriarchs and Heads of Churches in Damascus 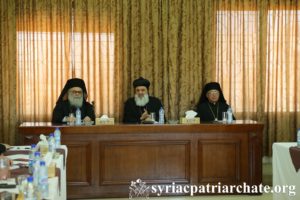 During the meeting, their Holiness, Beatitudes and Excellencies discussed the general situation in Syria and the region. They spoke about the effects of migration of Christians on their numbers in the region. They called upon the faithful to remain attached to the land of their forefathers despite the persecutions and difficulties. They also prayed for the safe return of the two abducted Archbishops of Aleppo: Boulos Yaziji and Mor Gregorius Youhanna Ibrahim.

Concerning Syria, they acclaimed the victory of the leadership, army and people of Syria over terrorism that aims at weakening Syria and dividing it. They emphasized the importance to participate fully in establishing a common vision for the country based on the principles of democracy, rule of law, equal citizenship and respect of diversity. They also emphasized the unity of Syria, its people and its territorial integrity from the Syrian Golan to the Syrian Jazeerah.

At the end of the meeting, a statement was issued.