Meeting of the Presidents of the Middle East Council of Churches 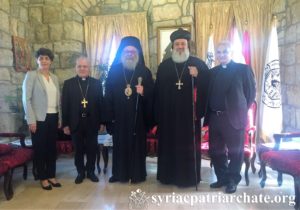 His Beatitude Cardinal Mar Louis Raphael I Sako, Patriarch of Babylon of the Chaldeans and President of the Council for the Catholic Family of Churches, and Rev. Dr. Habib Badr, Senior Pastor of the National Evangelical Church of Beirut, President of the Council for the Evangelical Family of Churches, also participated in the meeting, in addition to the members of the Strategic Support Group: His Excellency Mgr. Boulos Sayyah, Dr. Jean Salmanian and Dr. Michel Abs.

During the meeting, the Presidents of the Council discussed the general situation of the various churches in the Middle East. They spoke about the preparations for the next General Assembly which will take place in Summer 2020. They also discussed the administrative issues as well as the major projects that MECC is undertaking and the different ways of financing these projects.