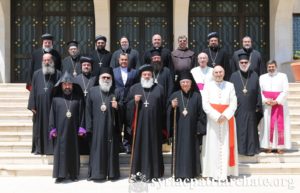 The fathers present discussed the general situation in the region and the effects of the past years of crisis on the peoples of the region in general, and the Christians in particular whose number is decreasing at an alarming rate due to migration. Christians are an essential component of the national fabrics of the region. Throughout the centuries, they maintained continuous presence and played a role model of active citizens who fully observe their duties and responsibilities. The participants affirmed the necessity of remaining firmly attached to the land of the forefathers despite the dire circumstances, so that they remain the salt of this earth and its light. They prayed for the safe return of the two abducted Archbishops of Aleppo: Boulos Yaziji and Mor Gregorius Youhanna Ibrahim.

Concerning the situation in Syria, the fathers acclaimed the victory of the leadership, army and people of Syria over terrorism which aims at weakening and dividing Syria; they emphasized the unity of the Syrian people and their solidarity with their state and its legitimate institutions. They highlighted the importance of the participation of all the components of the Syrian people in elaborating a common vision for the future of their country, within a state established on the foundations of democracy, the rule of law, equal citizenship and respect of diversity. They also emphasized the unity of Syria, its people and its territorial integrity from the Syrian Golan to the Syrian Jazeerah.

Their Holiness, Beatitudes and Eminences congratulated their muslim brothers and sisters on the occasion of the Eid Al-Adha, and prayed for peace in Syria so that all the Syrian citizens live in peace, safety and prosperity.