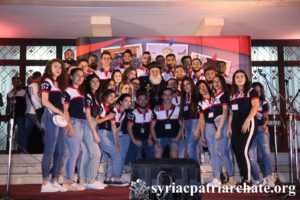 The Syriac Patriarchal Scout of Damascus performed a beautiful parade at the beginning of the opening of SYGG-Syria 2019. It was followed by St. Aphrem Patriarchal Choir performing hymns and Syriac chants.

His Eminence Mor Anthimos Jack Yacoub spoke about the joy to meet together again in one spirit, united by the love of the church and by the one Syriac language. He said that Syria unites the youth who love it and live under its sky. He thanked His Holiness who sows the love of Christ in the hearts of the youth and leads them to discover their calling to serve the church in what pleases the Lord and according to His will. He promised that, at the end of the SYGG-Syria, the youth will have gained new spiritual experiences and be more rooted in Christ.

In his inaugural speech, His Holiness spoke about the meaning of true discipleship and how to follow Christ. He encouraged the youth to get to deepen their knowledge of their roots and to learn more about the history of the church and its current life. After declaring the official opening of the Fourth Syrian Youth General Gathering, His Holiness assured that the Christians in Syria are firmly attached to their country and are rooted in it because it was blessed when the Lord Jesus walked on its soil and lived in it. He reminded the youth that Antioch, our eternal capital, will remain the birthplace of Christianity and of Christian missions. He expressed his joy to gather the youth who are the present and the future of the church, and to teach them the purity of the faith. He concluded his speech by inviting the Christian youth from all over Syria to be rooted in Christ who should be the center of our lives.