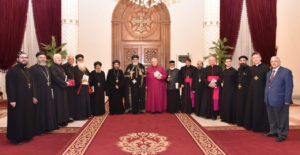 The Anglican–Oriental Orthodox International Commission held its eighth meeting from 28th of October to 1st of November 2019 at All Saints Anglican Cathedral, Cairo, Egypt.

Following its agreed agenda for the official dialogue, the Commission resumed its work on “Authority in the Church”, which was begun in Dublin, Ireland in 2017 and continued at Atchaneh, Lebanon in 2018.

The draft agreed statement on “The Inheritance of Ecumenical Councils” was reviewed and amended. The meeting discussed new procedures on the reception of ecumenical texts adopted by the Anglican Communion and offered comments on them. The Commission further considered its work program for the year ahead, with the intention of bringing the agreed statement on “Ecumenical Councils” to fruition at the next meeting. Papers on “Bishops and Synods” were presented, representing the next stage in the agreed agenda, drawing on existing ecumenical agreements, while preserving the distinctive characteristics of this dialogue.

The Commission was received in audience and for dinner by His Holiness Pope Tawadros II, Pope of Alexandria and Patriarch of the See of Saint Mark, in which he blessed and encouraged the ecumenical dialogue. He explained the unity of the Church as a symbolic cross with the four aspects of love, study, dialogue and prayer with Christ at its centre. His Holiness depicted the unity of the Egyptian people using the geographical form of the River Nile and its Delta as a praying figure with outstretched arms. The Commission was also received by Bishop Mouneer in his office and discussed its work with him and thanked him for his hospitality.

The Commission was particularly mindful that its meeting took place in Cairo, itself home to thousands of refugees from war and conflict in the region. The diaconal work of the Coptic Orthodox and Anglican Churches in Egypt was experienced by members of the Commission who visited the transformational work of the Coptic Orthodox Church with the Zabballeen (rubbish collectors) in the community and church in the District of Moqattam Mountain. The Commission also attended a presentation by Dr Maged Moussa, General Manager of Episcocare Egypt, a non-profit organization that constitutes the foundation for the care of Episcopal Social Services in Egypt. The members were made aware of the vision and mission of the work with some of the most marginalised communities and met workers and recipients of the programme, including Refuge Egypt, which offers healthcare, education and other meaningful support to the thousands of refugees who are embraced by the care of the Anglican Church in Egypt.

In response to two of the major crises facing our world –the degradation of the natural environment and the resulting mass movement of people- the Coptic Orthodox Church and the Anglican Church in Egypt have both responded with vision and compassion. The work of the Coptic Orthodox Church in Mokattam centres around pastoral care for the inhabitants of the area, pioneering the recycling of waste and embodying careful stewardship of the environment. The work of the Anglican Church amongst refugees is similarly a local manifestation of the Churches’ response to the worldwide refugee crisis.

The Commission is drawn from many different countries and cultures and represents Churches which are global in their expression and outreach. In this global context, the challenges that face all our Churches are similar. It was both inspiring and encouraging to share and hear news of our Churches and communities around the world, and to hold one another in prayers of thanksgiving and support for all that God calls us to do for His world.

The Commission was genuinely heartened to receive news that the United States House of Representatives has passed with overwhelming majority resolution 296 that recognises the Armenian genocide.

As we meet, we hold in our prayers those who have suffered violence in Oromia, Ethiopia including our sisters and brothers of the Ethiopian Orthodox Tewahido Church, praying repose for the departed, comfort for the grieving and support for all those impacted.

The Commission gave thanks for the opportunity of working and praying together in an ever-closer spirit of unity and love. The members of the Commission prayed for peace in the region, continuing to hold in their prayers the two bishops of Aleppo who were abducted in April 2013, Metropolitan Mor Gregorios Youhanna Ibrahim of the Syriac Orthodox Church, and Metropolitan Boulos Yazigi of the Greek (Rüm) Orthodox Church of Antioch. The members of the Commission renewed their pledge to facilitate a fraternal, pastoral and ecumenical visit to Syria as soon as possible.

At the conclusion of the meeting, the Commission thanks the Triune God, Father, Son, and

Holy Spirit, for the mutual understanding, fellowship and friendship that has been experienced and deepened and looks forward to the future in hope.

Present at the meeting in 2019 in Cairo