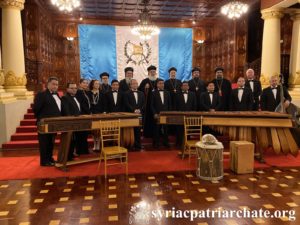 On November 6, 2019, His Holiness Patriarch Mor Ignatius Aphrem II attended a Concert in his honor at the National Palace in Guatemala City.

The presidential band played on the national musical instrument of Guatemala called Marimba. They performed classical and national pieces of music that reflect the musical art of the Guatemalan people and their civilization.