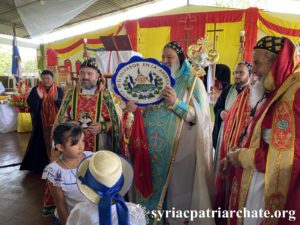 In his sermon, His Holiness expressed his feeling overwhelmed by the warm welcome of the faithful in El Salvador which made him feel at home and assured the faithful that they have been in his prayers for a long time. He praised God for His marvelous work among His people whom He called and who are all dear to His heart. His Holiness added that the Syriac Orthodox Church of Antioch is where the disciples of Christ were first known as Christians and had under it faithful from different races and cultures and speaking different languages. In Antioch, the Church was first called catholic or universal. From it, missionaries from our church went forth and preached the gospel to the entire world, acclaiming the glory of God and the coming of His kingdom. His Holiness told the faithful that we feel the calling of God to be together with other churches, sharing the richness of our spiritual heritage abd fighting together the challenges that the world is placing on our way. Talking to the faithful about the persecution as a mark of the true church,

His Holiness conveyed the reality of the suffering of Christians in the Middle East which has always been engulfed in war and violence and where the Church has always been persecuted. However, he assured them that the faith grows and that the members of the church remain steadfast in their faith and firmly attached to the teachings of the forefathers. His Holiness saluted the people of El Salvador who have been going through tribulations and subject to violence which is a sign of a weak relationship with God. He concluded his sermon by praying to the beloved country of El Salvador and all its citizens and government. He asked the faithful to be good citizens in order to show that they are disciples of Christ and have a credible witness to His gospel.