Meeting with the Mayor of Antigua – Guatemala 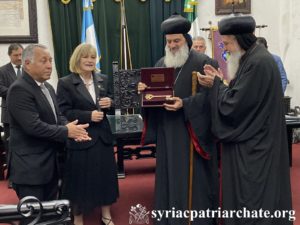 Her Excellency welcomed His Holiness ‘in his city’ and declared him as the guest of honor of Antigua.

In his speech, His Holiness thanked the Mayor for the love and honor shown by the people of Antigua. He spoke about the similarities between the peoples of Guatemala and the countries of the Middle East, especially in their firm attachment to the principles of liberty and human dignity in addition to the conditions that they lived under in the past century. His Holiness hoped that the sacrifices of the martyrs become a blessing for these countries and for the security, peace, stability, development and prosperity of these countries.