Meeting with the President of Guatemala Mr. Jimmy Morales 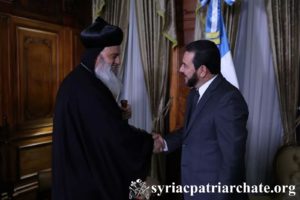 His Holiness thanked His Excellency for the warm welcome and spoke about the history of the Syriac Orthodox Church of Antioch and its missions that stretched throughout the ancient world. He mentioned the current range of the missions of the church and the universal character of its ministries. His Holiness also referred to the apostolic faith that was passed on through the ages and despite the persecutions, and reached us through the sacrifices of our forefathers.

His Excellency President Morales commended the role of His Holiness in promoting peace throughout the world. He listened to the overview of the work of the church in serving the flock of Christ. He wished His Holiness a pleasant stay in Guatemala during his apostolic visit to Central America.