Meeting with the Vice Mayor of Guatemala City 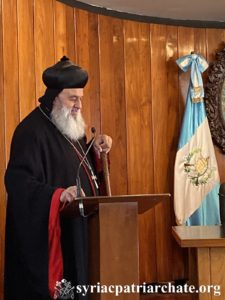 His Excellency welcomed His Holiness ‘in his home’ and declared him as the guest of honor of Guatemala City. He expressed his joy to be ‘honored by the visit of the pontiff of the most ancient church which still continues to use the language of Christ’. He also expressed the solidarity of the people of his city with the people of Syria who are going through difficult times.

His Eminence Mor Yacoub Eduardo greeted His Excellency and thanked him for his role in promoting progress and development in the city.

In his speech, His Holiness thanked the Vice Mayor for the love and honor shown by the people of Guatemala City. He said that, though we come from different countries with different cultures, yet we are united by similar features of our great civilizations, namely the Mayan and the Mesopotamian civilizations. He added that the suffering for noble causes and to uphold noble values has also been a unifying characteristic of both civilizations. He spoke about the common goal of fighting injustice and working together to promote peace. He expressed that he is proud of the faithful in Guatemala who are commended for their faith and firm attachment to the Church of Antioch. He concluded saying that we have the responsibility to share the culture of love and tolerance with all.