Statement of the Regional Episcopal Synod of India 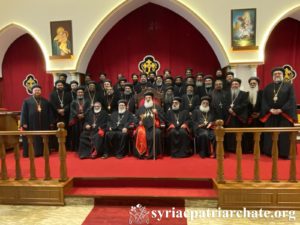 The Regional Episcopal Synod of India was held on 21 and 22 November 2019, at the Morth Shmouni Jacobite Syrian Orthodox Church in Muscat, Oman, presided over by His Holiness Moran Mor Ignatius Aphrem II, Patriarch of Antioch and All the East – the Supreme Head of the Universal Syriac Orthodox Church, with the participation of 31 Archbishops – members of the Regional Holy Synod in India and their Eminences 6 members of the General Secretariat of the Holy Synod of Antioch.

His Holiness opened the sessions of the Holy Synod with prayer asking the guidance of the Holy Spirit to lead the shepherds of the church in wisdom throughout the meeting. He also prayed for the health of His Beatitude Mor Baselios Thomas I, Catholicos of India, thanking him for his leadership and devoted service for the Church in India during many years and especially in these difficult times. His Holiness thanked His Majesty Sultan Qaboos bin Said and the governing authorities in the Sultanate of Oman for the spirit of tolerance and religious freedom shown to our community, especially for facilitating the arrangements for convening the synod in Muscat.

His Holiness underlined the suffering of the faithful in India to preserve the apostolic faith and traditions handed over by the forefathers and their loyalty to the Holy Throne of Antioch. He affirmed that, even if only one person remain loyal to the Holy Throne of Antioch, the Patriarch will do whatever it takes to support and care for that person.

Mor Gregoriose Joseph, Metropolitan Trustee, gave an overview of the current situation of the Church in India, and the Archbishops expressed their opinions and discussed the matters related to the situation and present crisis in the church in India.

The Synod affirmed that whatever be the difficulties and the losses, the Church in India will uphold the apostolic faith and traditions and will remain faithful to the Holy See of Antioch and to His Holiness the Patriarch of Antioch and All the East.

The Fathers of the Synod decided that the Dialogue Committee which was formed in the Holy Synod in 2015 during the First Apostolic Visit of His Holiness to India, consisting of: Mor Timotheose Thomas – Convener, Mor Gregoriose Joseph, Mor Athanasiose Geevarghese, Mor Theophilose Kuriakose, and Mor Coorilose Geevarghese, is still in existence and that they will make use of all possibilities for dialogue to resolve the issues and to achieve peace and reconciliation in the church in India.

In this regard, His Holiness and the Fathers of the Synod appreciated the initiative taken by the Government of Kerala by forming a cabinet sub-committee to resolve the conflict between the two factions of the church in India and the efforts taken by the Governor of Kerala for an amicable solution agreeable to both factions. The Synod affirmed their wholehearted support to and cooperation with the cabinet sub-committee and the Governor.

An Episcopal Advisory Committee was formed to assist the Holy Synod in taking appropriate decisions and actions for upholding the faith and the welfare of the church and to address the challenges that the Church is facing. The members of the committee are: Mor Timotheose Thomas – the Synod Secretary, Mor Athanasiose Geevarghese, Mor Theophilose Kuriakose, and Mor Coorilose Geevarghese. His Eminence Mor Gregoriose Joseph – the Metropolitan Trustee, will be the convener of the Epispocal Advisory Committee.

The Synod decided that, in emergency situations, all affected churches should conduct matters, especially legal affairs, with the knowledge and the consent of the present office bearers of the Church in India, namely, Mor Gregoriose Joseph – the Metropolitan Trustee, Mor Timotheose Thomas – the Synod Secretary, Clergy Trustee, Lay Trustee and Lay Secretary of the Church.

His Holiness appreciated the support of the general public and the media in Kerala as well as the leaders and members of sister churches and the people of other faiths in India in the struggle of protecting the churches and the cemeteries and the fundamental rights and human dignity of our faithful in India.

At the end of the Regional Synod, His Holiness thanked their Eminences for their spirit of unity, the commitment to the Holy See of Antioch and their sacrifices to preserve the true faith and traditions of our church in India. A special note of thanks was conveyed to the vicar and the faithful of Morth Shmouni Church in Muscat for making the arrangements for the meeting of the Regional Episcopal Synod.