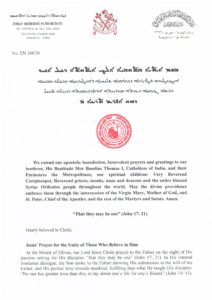 We extend our apostolic benediction, benevolent prayers and greetings to our brethren, His Beatitude Mor Baselius Thomas I, Catholicos of India, and their Eminences the Metropolitans; our spiritual children: Very Reverend Corepiscopoi, Reverend priests, monks, nuns and deacons and the entire blessed Syriac Orthodox people throughout the world. May the divine providence embrace them through the intercession of the Virgin Mary, Mother of God, and St. Peter, Chief of the Apostles, and the rest of the Martyrs and Saints. Amen.

Jesus’ Prayer for the Unity of Those Who Believe in Him

At the Mount of Olives, our Lord Jesus Christ prayed to the Father on the night of His passion, asking for His disciples: “that they may be one” (John 17: 21). In His internal trinitarian dialogue, the Son spoke to the Father showing His submission to the will of the Father, and His perfect love towards mankind, fulfilling thus what He taught His disciples: “No one has greater love than this, to lay down one’s life for one’s friends” (John 15: 13). Following the command of the Lord Jesus to be one as He and the Father are one (cf. John 17: 22), the apostles remained united with each other in the one faith, as St. Paul the apostle writes: “ There is one body and one Spirit, … one Lord, one faith, one baptism, one God and Father of all, who is above all and through all and in all” (Ephesians 4: 4-6).

In the prayers of the Feast of the Transfiguration, we recite the mimro of St. Jacob of Serugh, the great teacher of the church, on the unity of the Church, in which he says:

“the Father taught (Peter) through the one tent of light He made, that the Church is one and one is the Son Who is worshipped by her; Not many tents, but one tent for the Only One, and not many churches, but one Church for the Son of God”.

Indeed, these wise words that pronounce the unity of the church through the events of the Transfiguration of the Lord, affirm that the church has always sought unity. Moreover, it reflects the concern of the Fathers of the church for unity, which they saw as vital for the life of the church.

Through his words in the first epistle to the Corinthians, the apostle St. Paul warned the faithful concerning divisions: “Now I appeal to you, brothers and sisters, by the name of our Lord Jesus Christ, that all of you be in agreement and that there be no divisions among you, but that you be united in the same mind and the same purpose.” (I Corinthians 1: 10). One mind and one purpose are the result of the work of the Holy Spirit in individuals as well as in communities, through His talents that make the many one. This is similar to what happened to the apostles on the day of the Pentecost when the Holy Spirit descended on them in the form of tongues of fire. The Pentecost united the apostles and the disciples, unlike what happened in Babylon where the Lord confused their language and scattered them over the face of the whole earth (cf. Genesis 11: 5-9).

Unity of the Faith

The dawn of Christianity broke and it started to spread despite the persecutions. In fact, Christianity became stronger and endured the hardships by the grace of God which filled the faithful, which encouraged them and supported them through all difficulties, especially when oppression was most severe. Their unity was the source of their strength and perseverance. Hence, the unity of the faith makes the church united, and her children can partake in the sacraments as an expression of their fellowship and their spiritual unity in the one body which is the church.

Unity in the church is rooted in the firm relationship of the ministers and faithful with Christ and their total obedience to His divine commandments. Consequently, the unity of the church which is built on the correct relationship with the Lord Jesus Christ drives away divisions among the faithful arising from groupism. These divisions spread quickly in the fertile soil of new teachings or ideologies that are contrary to the teachings of the Gospel and the instructions of the apostles and holy fathers. Hence, the faithful side with either Paul or Apollos (cf. I Corinthians 1: 12).

Christ’s Cross as a Symbol of Unity of the Faithful

Christ’s Cross remains the strongest symbol of unity because the apostles, disciples and the entire humanity were included in the same salvation which was completed on the cross. In his epistle to the Corinthians, St. Paul points out the importance of the cross for the confirmation of their unity: “Was Paul crucified for you? Or were you baptized in the name of Paul?” (I Corinthians 1: 13). Hence, Christians understood that the cross of the Lord united them in the same sacrifice, love, and unique salvation.

Despite hardships, the one universal church grew stronger in the apostolic era because people from all nations accepted Christ as their savior and were united by the cross. There were “no longer Jew or Greek, there is no longer slave or free, there is no longer male and female; for all of you are one in Christ Jesus” (Galatians 3: 28). The third Patriarch of Antioch, St. Ignatius Theophoros, was able to unite the parts of the church in Antioch, namely the converted Jews and the believing Gentiles. He called her “catholic” because she united all ethnicities without discrimination and she was open to everyone, offering salvation to all. We learn thus the importance of the Lord’s teaching: “so there will be one flock, one shepherd” (John 10: 16).

Divisions in the Church

Witnessing to the Gospel of Christ continued to spread in the ancient East. Soon, theologians started to interpret divine matters in different ways and became divided over several issues – doctrinal or political. This resulted in the emergence of conflicts which were used by the evil one to divide the church. Foreign teachings found their way into the church in an attempt to drive the faithful away from the orthodox apostolic faith. The unity of the church was broken and the church nearly became a “kingdom divided against itself” (cf. Matthew 12: 25). Despite division in the church, the Grace of God preserved the church, though a great schism came to exist among Christians and resulted in their fighting each other.

Unity in the church may be taken for granted. Yet, it is difficult to preserve among the faithful and to restore it once division has taken roots. Through humility and love that unite us in Christ, we can work together to remove disputes and conflicts. Thus, we lift our hearts together to the Lord in one spirit. Consequently, the faithful truly become “the body of Christ and individually members of it.” (cf. I Corinthians 12: 27). Love which results from faith in the Lord Jesus Christ inspires in people the willingness to make sacrifices for others. For “unless a grain of wheat falls into the earth and dies, it remains just a single grain; but if it dies, it bears much fruit.” (John 12: 24). Likewise, when the faithful sacrifice for the sake of the unity of the church, and burry in the spiritual soil every wickedness, pride and selfishness, they will enjoy the fruits of the spirit which are love, joy, peace, patience, kindness, generosity, and faithfulness (Galatians 5: 22). This will keep the unity of the church intact and bring forth fruits of holiness for generations to come.

Working for the Unity of the Church

Since the first divisions in the church, and despite the resulting persecutions that affected our Syriac Orthodox Church, our church did not spare any effort to call and work for the unity of Christians. Indeed, Patriarch Mor Severus the Great traveled to Constantinople to discuss the matter of uniting Christians. The great scholar Mor Gregorius Bar Hebraeus, Catholicos of the East, wrote about the schisms in the church describing them as a conflict of terminology, inviting all Christians to unite. In recent decades, our church overcame the old historical wounds and sincerely opened up towards sister churches, collaborating in many ways, especially in the domain of pastoral ministry. Achieving unity among the Syriac churches which share the same language and have a common heritage, continues to be a priority for us. We will continue to work together to reach the fullness of unity in order to reclaim the unity of faith and witness, as it used to be in the first centuries of Christianity.

We thank God that the church today enjoys unity, though imperfect. It is united in praying for peace in the world and in the service of all humanity. Through this unity, the faithful from all churches, East and West, pray for the two abducted Archbishops of Aleppo, Boulos Yaziji and Mor Gregorius Youhanna Ibrahim, since the first moment of their abduction. We hope for their safe return to the dioceses. During this holy season of lent, we offer our prayers for them and appeal once more to all powerful decision makers to do their best for their safe return.

At the beginning of the Great Lent, while we meditate upon the unity of the church which is the body of Christ, we invite you to be united together and walk in the spirit through true repentance and fervent prayers, through reading the Bible and almsgiving, through ministry and witness to Christ. We, likewise, invite you to pray for the unity of our Holy Syriac Orthodox Church of Antioch, the unity is a source of our strength and a sign of our obedience to God. Let us overcome the stumbling blocks that seek to weaken the church, by tearing down every obstacle that rises before us through the work of the evil one who seeks to divide us. At the same time, let us pray and work for the unity of the entire Christian church.

May the Lord accept your fasting, repentance, prayers and almsgiving. May He make us worthy to rejoice in the Feast of His Resurrection, through the intercession of the Virgin Mary, Mother of God, St. Peter, Chief of the Apostles, and all the martyrs and saints.  ܘܐܒܘܢ ܕܒܫܡܝܐ ܘܫܪܟܐ

Which is the 6th year of our Patriarchate