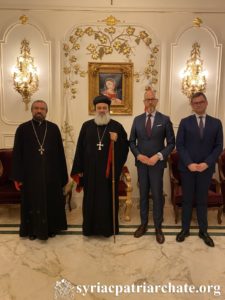 His Holiness welcomed His Excellency and discussed with him issues related to the situation of Christians in the Middle East as well as the effects of immigration on their presence in their homeland. He also spoke about the work of development and humanitarian assistance that the Patriarchate is offering.