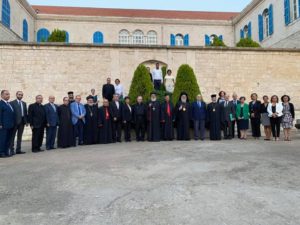 Hosted by the Maronite Church- Bkerki

and the Coptic Orthodox Church-Cairo

The Executive Committee of the Middle East Council of Churches

The Executive Committee of the Middle East Council of Churches held an exceptional meeting, as the Council’s Twelfth General Assembly was scheduled to take place at this time. However, the exceptional circumstances imposed by the repercussions of the COVID-19 pandemic, and the inability of direct meeting between members from different countries and churches, and replacing it with virtual electronic means for the member churches in Egypt, Kuwait, Palestine, Jordan, Syria, Iraq, Iran, and Cyprus, produced a legal agreement on this exceptional meeting, which was hosted in Lebanon by His Beatitude Cardinal Mar Bechara Boutros Al-Rahi – Patriarch of Syriac Maronite Church of Antioch at the Maronite Patriarchate in Bkerke with the participation of His Beatitude Youhanna X – Patriarch of Antioch and All the East for the Greek Orthodox Patriarchate of Antioch and president of the Council for the Greek Orthodox Family, His Holiness Mor Ignatius Aphrem II – Patriarch of Antioch and All the East and Supreme Head of the Universal Syriac Orthodox Church who is the president of the Council for the Eastern Orthodox Family, and Right Rev. Dr. Habib Badr, President of the National Evangelical Union Lebanon and president of the Council for the Evangelical Family. His Beatitude Mar Louis Raphael Sako – Patriarch of Babylon for Chaldeans and president of the Council for the Catholic family, participated electronically from Iraq. And in a generous initiative, His Holiness Pope Tawadros II – Pope of the Coptic Orthodox Church hosted members of the Committee from the various churches in Egypt at the Papal Headquarters in the Coptic Orthodox Church of in Cairo.

After the opening prayer, a speech was made by His Beatitude Cardinal Mar Beshara Boutros Al-Rahi in which he said: “The ship threatened of getting filled and sinking by strong winds and waves, symbolizes the witnessing Church in the sea of our Middle East countries troubled by the winds of conflicts and wars, political, economic, financial and living crises, and the Corona pandemic, and which reached a climax in Lebanon with the Beirut port explosion on August 4, which left many casualties and destruction.

The Christian presence in this East became diminished, and its message limited, and fear dwelt in the hearts of Christians, until they chanted the cry of Jesus’ disciples full of fear and hope: “Teacher, don’t you care if we drown?” (Mark4: 38). So our Lord silenced the winds with a word, and a complete tranquility occurred. He called the disciples to be strong in fear, and to stand firm in the faith. This invitation is addressed to us today, and to our Churches. Let us not forget the word of our Lord Jesus: “In this world you will have trouble. But take heart! I have overcome the world.” (John16: 33)”

He emphasized that “the Middle East Council of Churches is invited, in the current circumstances, to work with the churches and their presidents, to confront the waves and winds that ravage their homelands, institutions, people, entities, and cause, with stances of faith and hope”.

Then a recorded word of His Holiness Pope Tawadros II, in which he welcomed the participants, and continued: “I would like to join Lebanon in the tragedy it suffered early August, and we pray for this beloved country and for all its citizens in the north and in the south for the spirit of love to prevail especially as Lebanon celebrates its centenary of its founding as a distinguished and open country among the Arab people. I pray that all of its crises shall end, that that it returns to participation, and to his vital presence in the Middle East”.

His Beatitude ended: “Thanks goes to Secretary General Dr. Souraya Bechealany, for her tremendous efforts since January 2018 until now. I pray for the Middle East Council of Churches, to remain strong, effective and influential, and a place for joint action among our Churches in the countries of the Middle East, and that the new Secretary General will preserve these goals for which this council was formed, and raise the prayer for peace in the world and in many points of conflict in the Middle East. “

After that, the work of the first session was launched under the presidency of His Holiness Patriarch Mor Ignatius Aphrem II, followed by the legal call for presence to the participating members personally and through electronic means, the appointment of the meeting minutes’ taker and the designation of the drafting committee of the final statement, approval of the agenda, and approval of the minutes of the previous Executive Committee meeting that was held in Cyprus on January 21-22, 2020. Afterwards, the Secretary General of the Council, Dr. Souraya Bechealany, presented her comprehensive report on what the council did over two years of her mandate (2018-2020), and finally the financial report.

In a second closed session attended by the original members and headed by Rev. Dr. Habib Badr, the decisions and recommendations were recited, the General Secretary Dr. Michel Abs and the Associate General Secretary Father Gabriel Hachem for the Catholic family were appointed. In the closing session headed by His Beatitude Patriarch Youhanna X, the meeting minutes and the closing statement were approved. Then there was a closing prayer, and the memorial photo.

The participants emphasized the following:

The Executive Committee of the Middle East Council of Churches, realizing the magnitude of the challenges and responsibilities entrusted to the Council, raises the prayer to the Lord, asking for his blessing, and renewing before him its commitment to the continuation of the journey of achieving unity in love and partnership in responsibility.