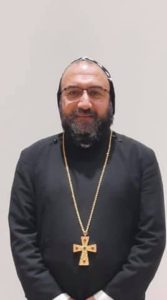 Very Rev. Raban Cyril Babi was born in Beirut in 1976. He joined Mor Aphrem Theological Seminary in Maarat Saydnaya in 2002 and graduated from it with a Bachelor Degree in Theology and Syriac Language. He was tonsured monk in March 2006 and was ordained priest in July of the same year. He was decorated with the pectoral cross in 2010. He received a Licentiate (Masters) Degree in Canon Law from Sagesse University in Lebanon in 2015. He served as a Secretary in the Archdiocese of Aleppo and Environs in 2011 and 2012. He taught History of the Church and Canon Law and Philosophy of Law at Mor Aphrem Theological Seminary in Maarat Saydnaya. He served as a priest in many parishes including: St. George Church and St. John the Baptist Church in Brussels (2008), St. Jacob Baradeus Church in Jaramana – Damascus (2009-2011), St. Mary Church in Saydnaya (2017). His Holiness appointed him as the Director of the Legal Department since July 2017 and Director of the Patriarchal Residence in Atchaneh since September 2018.
‎