Official Reception from the Syrian Embassy in Sweden 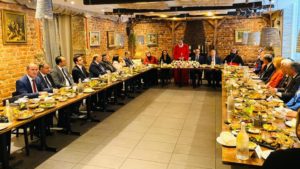 On September 23, 2021, His Holiness Patriarch Mor Ignatius Aphrem II visited His Excellency Mr. Tamim Malko, Chargé d’Affaires of the Embassy of Syria to Sweden, at the Syrian Embassy in Stockholm.His Excellency and his wife held a reception in honor of the visit of His Holiness.His Holiness was accompanied by their Eminences Archbishops: Mor Dioscoros Benjamin Atas, Patriarchal Vicar in Sweden, Mor Dionysius Issa Gurbuz, Patriarchal Vicar in Switzerland and Austria, Mor Polycarpus Augin Aydin, Patriarchal Vicar in Holland, and Mor Joseph Bali, Patriarchal Secretary and Media Office Director.Their Excellencies: Ambassador of Russia Mr. Victor Tatarintsev, Ambassador of Algeria Mr. Ahcene Kerma, Ambassador of Cyprus Mr. Sotos Liassides, Ambassador of Lebanon Mr. Hassan Saleh, Ambassador of Belarus Mr. Dmitry Mironchik, Ambassador of Armenia Mr. Alexander Arzoumanian, and Ambassador of Iraq Mr. Amer Mahmoud Ageel, attended the reception.His Excellency welcomed His Holiness and the accompanying delegation. He appreciated the role of His Holiness in promoting peace and justice. He spoke about the role of His Holiness in bringing to the international fora the voice of the Syrian people suffering from the sanctions and other international decisions. In turn, His Holiness thanked His Excellency for his warm welcome and expressed his appreciation about the services offered by the embassy. He spoke about the current situation in Syria depicting the crises that is affecting the lives of the people. He emphasized that the Syrian people remains united against terrorism and is working towards the reconstruction of Syria. Despite the economic crisis aggravated by Covid-19, the determination of the Syrian people gives hope that peace and prosperity will return to Syria.