Homily of His Holiness During the Prayer for Peace 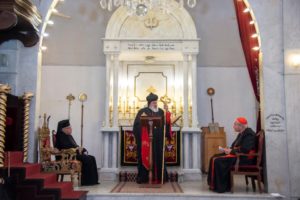 Your Eminence Christoph Cardinal Shonborn, Archbishop of Vienna,Your Beatitude Patriarch Joseph Absi,Your Eminence Mario Cardinal Zenari,Your Eminence, Graces, Excellencies, Distinguished guests,With great pleasure and immense joy, I welcome you, Your Eminence, together with your entourage to the seat of our Syriac Orthodox Patriarchate of Antioch and to Damascus, the city of St Paul the Apostle and ancient capital of our beloved country Syria. The most ancient capital continuously inhabited in the entire world.I welcome you on behalf of the Syrian people, Muslims and Christians, who continue to suffer even after 10 years of a war that has destroyed the lives of so many innocent children, young and old. Among them, eminent Christian Church leaders, especially the two Orthodox Archbishops of Aleppo Boulos Yazijy and Mor Gregorios Yuhanna Ibrahim who were kidnapped over 8 years ago, as well as important Muslim scholars of religion such as the late Muhammad Saeed Ramadan Albuti.This war also destroyed many houses of worship, both churches and mosques, and homes of millions of people who became homeless and internally displaced. In addition, millions of Syrians were forced to leave their country and become refugees in different parts of the world.Throughout this difficult time in our country, many people – including some church leaders in the west – have chosen to either adopt the official narrative of events of their governments concerning what took place in our country, or remain silent. Very few people raised their voices against the acts of terrorism and the global war led by international and regional powers. A war which targeted not only human life, but also our historical and cultural heritage and patrimony. We remember with gratitude the stand of His Holiness Pope Francis who called the entire world on several occasions to offer prayers for our country.Others have distinguished themselves as our true friends by lobbying for peace and justice and the lifting of the unjust and immoral sanctions imposed on us by the USA and Europe. These sanctions are hurting the needy and the weak, further deepening the suffering of millions of Syrians.Today, we welcome such a friend who often showed great concern for our cause by offering prayers, organizing meetings with leaders of the USA and other countries for this purpose and inviting some of us on several occasions to speak about the suffering of our people. The annual meeting of the International Catholic Legislators Network (ICLN) is one of these platforms where we encounter important decision-makers from different parts of the world. Kindly allow me to take this opportunity to thank you and the leadership of ICLN for inviting me to be one of the patrons of this important organization.We know that friendship is something you cherish and hold dear. It was in fact the motto you chose for your ministry when ordained a bishop 30 years ago: “Vos Autem Dixi Amicos” (I have called friends). We take this opportunity to congratulate your Eminence on your thirty’s episcopal consecration anniversary which was three days ago, September 29th. Wishing you a long and healthy life.It is worth mentioning that your Eminence took your monastic vows at Warburg Benedictine Monastery, which today is the see of our patriarchal vicariate in Germany.Your Eminence,We thank you for bringing with you our friends from Pro-Oriente, bringing to our mind a blessed visit by one of your predecessors, Franz Cardinal Konig of blessed memory, who was the founder of Pro-Oriente. He was also accompanied by the president and the general secretary of Pro-Oriente. They were the guests of one of my predecessors, the late Patriarch Mor Ignatius Jacob III of blessed memory. These two great church leaders stood side by side in this very place in March 1978. They prayed together affirming the oneness of the faith of our two churches and stating their eagerness to work towards a stronger relationship between our churches and a more peaceful world for all.We welcome you in our midst and pray that your visit will be a blessing to our country and will afford you a good chance to have a fair idea of the suffering of our people but also of their hope and aspirations for a peaceful and dignified living for us and for the entire world.