Laying the Foundation Stone of the Syrian Hungarian PrivateSchool 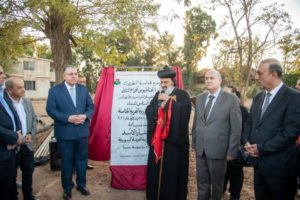 On October 18, 2021, His Holiness Patriarch Moran Mor Ignatius Aphrem II laid the foundation ston of the Syrian Hungarian Private School in Bab Sharqi – Damascus.The ceremony was attended by their Excellencies: Mr. Darem Tabbaa Minister of Education, Mr Husam Samman, Secretary of the Baath Party in Damascus, and Mr. Peter Csulak Charge d’Affaires of Hungary in Damascus. His Holiness emphasized that the mission of the church is to educate the generations through building schools. He pointed out that monasteries and churches used to be the universities and schools in the past. He added that the Syriac faithful were known to build schools near the churches because the church feels the duty to raise educated generations. He spoke about this project as a service to the citizens in the neighborhood. He emphasized that the future of Syria is in the solidarity of its people. He also spoke about the motivation and enthusiasm that such educational project has, and thanked the Hungarian government and Hungary Helps for their support for this important project. Their Eminences Archbishops: Mor Timotheos Matta Al-Khoury, Archbishop of Homs, Hama, Tartous and Environs, Mor Anthimos Jack Yacoub, Patriarchal Vicar for Youth Affairs and Christian Education, Mor Boutros Kassis, Patriarchal Assistant and Patriarchal Delegate in Aleppo, Mor Cyril Babi, Patriarchal Vicar for the Patriarchal Archdiocese of Damascus, and Mor Joseph Bali, Patriarchal Secretary and Media Office Director, were also present.