Visit to the Coptic Orthodox Archbishop of Paris and North France 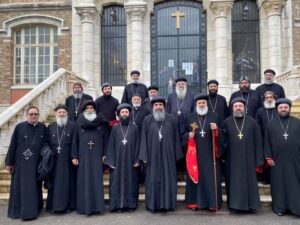 On October 25, 2021, His Holiness Patriarch Mor Ignatius Aphrem II visited His Eminence Anba Mark, Coptic Orthodox Archbishop of Paris and North France, at his headquarters in Paris.Their Eminences Archbishops: Mor George Kourieh, Patriarchal Vicar in Belgium, France and Luxembourg, Mor Timotheos Matta Al-Khoury, Archbishop of Homs, Hama, Tartous and Environs, and Mor Joseph Bali, Patriarchal Secretary and Media Office Director, accompanied His Holiness as well as Very Rev. Fr. Yacoub Aydin and Very Rev. Raban Zakai Jalma.His Eminence Anba Mark and the clergy welcomed his Holiness and the accompanying delegation. His Holiness entered the cathedral while the choir of deacons chanted the welcoming hymns. After the prayers, His Eminence Anba Mark delivered a welcoming speech and expressed his joy and that of the faithful to receive His Holiness and his blessings. In his speech, His Holiness spoke about the special relations that exist between the two sister churches, namely the Coptic Orthodox and the Syriac Orthodox churches. These good relations bring together the faithful of both churches and they offer a common witness of Christ in this world. He also remembered the common church history where Syriac clergy became popes of Alexandria, as well as their roles in strengthening the orthodox faith. He assured that the two churches continue to offer witness for Christ, despite the persecutions that force the faithful to migrate from the East. At the end of the prayer, His Holiness blessed the faithful and took a tour of the Archdiocesan headquarters.