Elevation of Fr. John Kouki to the rank of Khuroyo 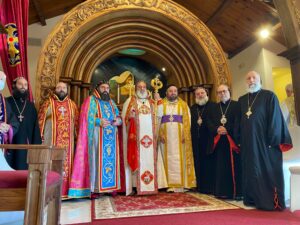 On January 30, 2022, His Holiness Patriarch Mor Ignatius Aphrem II celebrated the Holy Qurobo at St. James of Sarug Church in California.His Holiness was assisted by their Eminences Archbishops: Mor Dioscoros Benjamin Atas, Patriarchal Vicar in Sweden, and Mor Timotheos Matta Al-Khoury, Archbishop of Homs, Hama, Tartous and Environs. Their Eminences Archbishops: Mor Clemis Eugene Kaplan, Patriarchal Vicar for the Archdiocese of the Western USA, Mor Dionysius John Kawak, Patriarchal Vicar for the Archdiocese of the Eastern United States of America, Mor Maurice Amsih, Archbishop of Jazeera and Euphrates, and Mor Joseph Bali, Patriarchal Secretary and Media Office Director, were also present in the Holy Qurobo.In his sermon, His Holiness spoke about the divinity of the Lord Jesus Christ which the people refused to believe and confess even after witnessing the miracles that He performed. He added that those who knew Christ as a child living among them, growing up and becoming a carpenter, were surprised at the wisdom with which He spoke because they did not believe in Him, and they were following their own prejudice which blinded their hearts from seeing the truth. His Holiness said that many in our days behave in the same manner, neglecting the other instead on encouraging them and looking at their good qualities. He pointed out that we should learn to respect everybody and support the weak, without hatred, so that we become true disciples of Christ, walking in His footsteps in love, as befits the true ambassadors of Christ. During the Holy Qurobo, His Holiness elevated Rev. Fr. John Kouki to the rank of Khuroyo. Very Rev. Fr. John thanked His Holiness for his love and support to all the faithful of the parish. He also expressed his gratitude to His Holiness for bestowing on him this rank, asking for his prayers that the Lord may bless his ministry and make it fruitful.