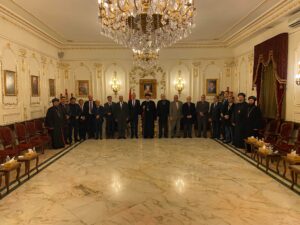 On the occasion of the New Year 2022, His Holiness Patriarch Mor Ignatius Aphrem II invited their Excellencies the Ambassadors, Charge d’Affaires and Diplomatic Representatives to a Formal Reception at the Patriarchate in Bab Touma.The reception was attended by ambassadors from Arab countries, Asia and Europe.His Holiness Patriarch Aphrem II welcomed their Excellencies and spoke about the circumstances that the world has witnessed last year, pointing out the negative effect of the economic crisis on the Syrians. He also emphasized on the necessity to gave hope in the future that holds better days and to be optimistic about the new year which can carry solutions that may bring peace to Syria and the world. His Holiness welcomed the efforts of the friends of Syria in support of the Syrians, especially in lifting the sanctions that are imposed on them. He spoke about the difficult circumstances and the lack of basic material as well as the inflation. He remembered the visits of international figures who came to Syria and left with many impressions about the daily lives of the Syrian people. Their Excellencies then expressed their joy to gather at the Syriac Orthodox Patriarchate and they felt this reception to truly reflect the image of the Syriac Orthodox Church and the Syrian hospitality. Some spoke about the role that the Church can play in uniting the people and also conveying their voice and demands. Their Eminences Archbishops: Mor Cyril Babi, Patriarchal Vicar for the Patriarchal Archdiocese of Damascus, Mor Boutros Kassis, Patriarchal Assistant and Patriarchal Delegate of the Archdiocese of Aleppo and Environs, and Mor Joseph Bali, Patriarchal Secretary and Media Office Director, also attended the reception.