Worship and Burial of the Cross 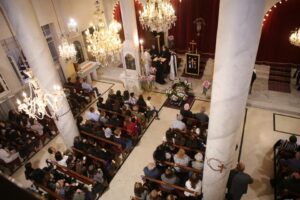 On April 22, 2022, His Holiness Patriarch Mor Ignatius Aphrem II celebrated the services of the worship and burial of the Cross at St. George Patriarchal Cathedral in Bab Touma in Damascus. His Holiness was assisted by their Eminences Archbishops: Mor Cyril Babi, Patriarchal Vicar in the Patriarchal Archdiocese of Damascus, and Mor Joseph Bali, Patriarchal Secretary and Media Office Director. St. Aphrem Patriarchal Choir in Damascus chanted the special hymns for the occasion. In his sermon, His Holiness spoke about the different stages leading to the crucifixion, starting with the last supper where He taught His disciples true humility, and through His fervent prayer at the Getsemani where He asked them to remain awake with Him but they failed. He also reminded of the painful treason of Judas who sold the Lord and the judgment that was made leading to His crucifixion. He described the torture that He went through and how the soldiers were mocking Him. Blindness affected the minds of the people who refused to believe in Jesus. His Holiness then meditated upon the dialogue between the two thieves who were crucified next to the Lord and how one told the Lord to show His power and save Himself and others while the other thief repented and asked the Lord to remember Him in His kingdom. Thus the Lord taught us that repentance is always accepted and that salvation is a free gift to those who choose repentance, humility and faith in the Lord.After the sermon, His Holiness carried the crucifix in a procession and concluded the prayer with the service of the burial.