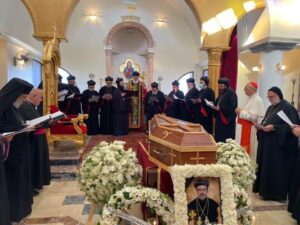 The funeral service was also attended by heads of churches in Damascus as well as representatives of Patriarchs and civil authorities and dignitaries.

At the end of the Funeral Service, the late Mor Gabriel Dahho of blessed memory was buried in Mor Aphrem Monastery, Maarat Saydnaya.

His Holiness delivered a eulogy in which he spoke about the qualities of the late Archbishop Mor Gabriel Dahho, his faith and his ministry which distinguished him and made him dear to many. He added that we are humanly sad for being separated but a heavenly hope strengthens our belief that he is in a better place. His Holiness pointed out that life is a bridge that we pass through to reach our eternal and true home. The purpose of life is to have strong faith reflected in good deeds. This is what the Late Mor Gabriel Dahho lived and preached. He was faithful to employ the talents that the Lord bestowed upon him to the service of others. He concluded by praying that the late Mor Gabriel Dahho be counted among the faithful servants who will be rewarded for their faith and ministry.

May his memory be eternal.