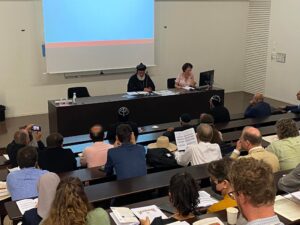 On July 4, 2022, His Holiness Patriarch Mor Ignatius Aphrem II inaugurated the XIII Symposium Syriacum and the XI Congress for the Arabic Christian Studies, at the National Institute for Oriental Languages and Civilizations (INALCO), in Paris.

In the opening session, His Holiness thanked the organizers and participants and spoke about the importance of this symposium that includes among its participants many orientalists and syriac studies experts. He expressed his joy to see that scholars are carefully studying the rich Syriac heritage and revealing the cultural and spiritual value of the works of the early Christian Syriac writers. His Holiness appreciated the new discoveries that are being published and that shed light on the theological writings and philosophical and scientific works that are not yet known. At the end of his speech, His Holiness wished success for the symposium and hoped for continuous cooperation and progress in the field of Syriac Studies.