Arrival at the Lady of the Zunoro in Homs 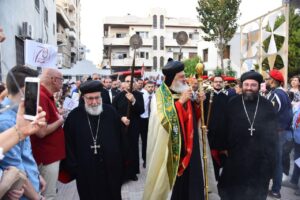 On August 14, 2022, His Holiness Patriarch Mor Ignatius Aphrem II arrived to the Lady of the Girdle (Zunoro) Cathedral – Homs, for inauguration Shrine of belt (Zunoro) of the Virgin Mary.

He was received by His Eminence the Archbishop Mor Timotheos Matta Al-Khoury, Archbishop of Homs, Hama, Tartous and Environs, the clergy of the archdiocese as well as the Syriac Scouts of the Archdiocese.

His Eminence Armenian Orthodox Archbishop of Damascus Armash Nalbandian, Rev. Riyad Jarjour and Representatives of the Churches in Homs were also present.