Visit of the Ambassador of Brazil in Syria 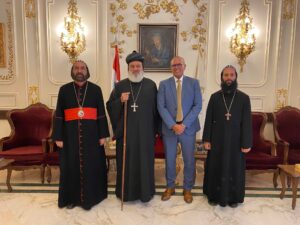 On September 5, 2022, His Holiness Patriarch Mor Ignatius Aphrem II received at the Patriarchate Headquarters in Bab Touma, His Excellency Mr. André Santos, Ambassador of the Federal Republic of Brazil to the Syrian Arab Republic.

His Holiness congratulated His Excellency on his new appointment as Ambassador of Brazil in Syria, and wished him success in his mission. They spoke about the history of the Syriac Orthodox Church and its diaspora, especially in Brazil where the migration of Syriac Christians started at the turn of the previous century. They also discussed the current situation in different levels, local, regional and international. They also spoke about the suffering of the Syrian people due to the unilateral sanctions imposed on Syria.