Visit of the Hungarian Charge d’Affaires in Syria 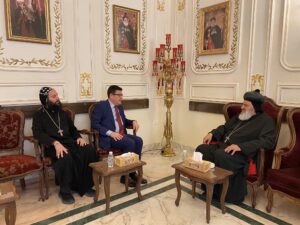 His Holiness congratulated His Excellency on his new appointment as Ambassador of Hungary in Syria, and wished him success in his mission. They spoke about the history of the Syriac Orthodox Church and its role in promoting civilization and spreading knowledge in the East and West. They also discussed the cooperation between the patriarchate and Hungary Helps.