Inauguration of Conference-Future of Christian Presence in Levant 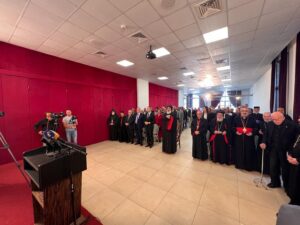 On November 4, 2022, His Holiness Patriarch Mor Ignatius Aphrem II inaugurated the conference entitled: “The Future of the Christian Presence in the Levant”, convened at the Patriarchal Residence in Atchaneh.

The conference is organized by the Hungarian Center for Levantine Christianity (HCLC) in collaboration with the Levant Center for Research and Studies.